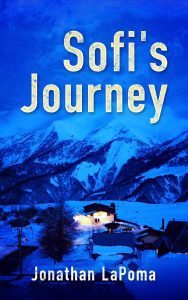 After graduating from a Peruvian university, twenty-one-year-old Sofi Diaz has difficulty finding a job in her native country. She applies at a ski resort in Montana through a work-abroad program and is hired. Though she’s scared to leave Peru, she accepts the position because she feels compelled to financially support her emotionally-abusive alcoholic mother and because she believes the trip could help her find some form of relief from the obsessive-compulsive disorder that has dominated her life since her father left the family the year before.

Though she travels thousands of miles from her mother, Sofi finds herself right back in the hands of a controlling and manipulative woman. After suspecting her husband of sexually desiring Sofi, Ms. Gates, Sofi’s boss and a woman whose life is dominated by rules, orders Sofi to stay close to her at all times. She makes Sofi her personal assistant, assigning her frivolous tasks in spite of Sofi’s insistence upon working in the kitchen. Under the influence of her OCD, Sofi feels compelled to prepare her own food, and the position of assistant has taken her far from her kitchen comfort zone.

Sofi has an American boyfriend named Danny who lives in Hollywood and claims he can make her a star if she leaves her job and travels to LA. Sofi, terrified to violate the terms of her visa, considers this not only because she cares about him, but also because she thinks that acting will help her regain the self-esteem she lost when her father left her mother—curing her of her mental illness.

As the weeks pass, Sofi’s stress level increases, as does the severity of her OCD symptoms. Danny stops answering Sofi’s calls and emails, and Ms. Gates, suspecting her husband of cheating, puts further restrictions on Sofi. Sofi’s behavior gradually becomes more bizarre and her fellow workers begin to insult and ignore her. She feels incredibly alone, but soon meets a Canadian boy named Charlie, similarly awkward and teased. While Sofi won’t stand up for herself, she stands up for Charlie, and the two develop a friendship.

Sofi begins to have strong feelings for Charlie, but feels compelled to stay with Danny. When Danny fails to show up after he promises to visit her in mid-December, Sofi has a panic attack and does something that she not only deeply regrets, but that gets her fired, resulting in the revocation of her visa.

Faced with certain deportation, Sofi must make the most difficult decision of her life: move to California, or do as she’s told and return to Peru. Or perhaps, with confidence growing, does she have a third, and better, option? As Sofi gains better understanding of the origin of her disease, she begins to realize that this is her journey and that no rules can stand in her way.